read latest news on wild horses to be shot dead in unique Australian national park
" The area has entered Australian folklore as the location of the Snowy River, which is associated in many Australians' minds with wild horses."
read full story
Posted by Wild Heart Ranch -Wild Horse News at 3:00 PM 18 comments:

Wild Horses for the Soul

Mustangs on the Mountain
Destined for slaughter, a herd of wild horses find reprieve -- and a home -- near Wye.

If you've never been in the midst of a large group of horses, you should try it. Even if you've been around a solitary horse or two, even if you've ridden in the past, nothing quite prepares you for the experience: Several tons of flesh crowding in on matchstick legs, their coats rippling with color in the sun and their backs — if you could somehow freeze the muscle inside from its unending, tidal, fluid movement — like loamy hills. They smell of dust and straw and that singular, not-quite-unpleasant horse smell — musty and wholly animal; strange to anyone not used to it.


If that wasn't enough, these horses, kept on the 40 acres of John Houston Eccleston “Excy” Johnston's nonprofit Wingspur Wild Horse Sanctuary near Wye, are about as wild as you'll find on this side of the Rockies. Captured by the state of Nevada in the high desert, just weeks away from a European or Asian dinner plate when Johnston bought them off a “killer buyer” after getting a tip from a mustang rescue organization, they still have the great majority of their wildness about them: their instinctual hierarchy; their wariness; their own language of lip trills and eye rolls and head shakes that only they completely understand. For a city boy, standing among them — the horses snorting hot breath over my tape recorder and trying to eat the notebook out of my hand — is to be simultaneously terrified and in awe of the beauty that nature can create when we aren't looking.
Their caretaker (“owner” doesn't fit these creatures by a mile), Excy Johnston, is an unlikely cowboy. A scion of old money from Maryland — his family made a scandalous amount from procurement contracts with the Union Army during the Civil War — about all that was left of the family fortune by the time Johnston was born was a rambling estate in Baltimore and his handed-down mouthful of a name. When Excy was 8, his father, pining for the excitement of the West, bought a ranch near Prescott, Ariz. and moved his family there. In short order, Excy became a horseman. His silver-spoon past was sometimes at odds with the rough-and-tumble young ranch hand he became. The summers he was 16 and 17, his grandmother convinced him to come back East to fulfill what she saw as his social obligations. Those summers, Johnston split his time between button-down functions and riding broncs at New Jersey's famous Cowtown Rodeo.


“I would go to deb parties all week, and then go ride a bronc at Cowtown on Saturday night,” he said. “It was really a gas. You'd have your tux on one night and then the next night you'd get out there and ride a bronc.”


Though he admits that rodeo was an addiction, there was a problem: he wasn't very good at it. Seeing the broken old cowboys who had been in the game for years, he decided the safer course was to seek an education. That choice soon landed him at Texas Tech, where he received a degree in architecture. After graduation, he hung out a shingle in Austin.

The wild Mustangs of Corolla fates are now unceratin in the near future after over 500 years of survival on the Banks of Corolla...


"COROLLA — Wild Spanish Mustangs were dropped off on the Outer Banks centuries ago when the Spanish planned to colonize the islands. Today, a new management plan calls for thinning the herd from more than 100 down to just 60, and the horses face an uncertain future.

The wild horses of Corolla, also known as bankers, have survived in the Outer Banks for nearly 500 years. Now they face their toughest hurdle. The beaches where the Spanish Mustangs landed so long ago are now filling up with tourists.

“I’ve worked with horses a good part of my life,” said Steve Rogers of the Corolla Wild Horse Fund. “I’d say their biggest danger is us -- people.”

Rogers’ job is to educate the masses. He spends his summer days handing out brochures on the beaches and intercepting people trying to get to close to the animals.

“I just want to give you some information about the horses,” Rogers told a group of tourists. “You have to stay at least 50 feet away at all times and not feed them."

"Most of the folks who come here don’t know the rules," Rogers said.

Karen McCalpin, who runs the Corolla Wild Horse Fund, the group charged by the county to oversee and protect the horses, said the animals do not belong to anybody.

McCalpin routinely has to remove injured horses from the herd. The injuries are often caused by humans.

“We’ve had six that were intentionally shot,” McCalpin said.

The horses roam 12,000 acres or 11 miles of the island. Much of that land is privately owned and those owners continue to build.

“There are about 300 houses in that area, but there are 3,080 platted lots.” McCalpin said. “And certainly if all those were to be built out, I don’t know how long people and wild horses can co-exist. Probably not another five centuries unless we do more careful thinking about how we develop the rest of the other banks.”

From a recent article in http://www.lasvegasnow.com- wild horse advocates and government see the issues of round ups very differently
One sees it from the hear- one tries to use logic to defend their position


"This is a very passionate issue for some people. The Bureau of Land Management says there is not enough food to support the amount of horses and burros. Wild horse advocates say that's not true and the government needs to manage the herds better.

Wild horses represent the picture of freedom to Billie Young. That is why she took on the federal government. She formed America's Wild Horse Advocates.

check out the full article to see where you fit in -
http://www.lasvegasnow.com/global/story.asp?s=6007145
Posted by Wild Heart Ranch -Wild Horse News at 10:30 AM 13 comments:


Former wild Nevada horses are now the newest members of the Mounted Color Guard, based at Barstow, California.

The horses were trained by state inmates of the Warm Springs Correctional Facility in Carson City, and handed over during a ceremony on Saturday. Fifteen additional horses were also there, up for public adoption.

The training procedure is a special tradition between the Bureau of Land Management and the U.S. Marine Corps., dating back two decades.
Posted by Wild Heart Ranch -Wild Horse News at 1:05 PM 3 comments:

Sale of wild horses for slaughter stopped by House Vote

Victory for wild horses with House vote
For those of you that love wild horses:

The House directed the Interior Deprtment on Thursday to halt the sale of wild horses for slaughter, saying that was not the purpose of the program that makes the horses and burros available for adoption.

call to action to save wild horses

We have another opportunity to stop the slaughter of 8,200 wild horses awaiting their fate in BLM holding facilities. The U.S. House of Representatives will be voting on an amendment introduced by Representative Nick Rahall (D-WV) on May 18th - Thursday that will prohibit your tax dollars from being used to send wild horses to slaughter. This amendment will be attached to the House Interior Appropriations Bill.

It was just one year ago that an identical Rahall amendment passed overwhelmingly in the House but was sabotaged by Senator Burns in the Senate Conferee Committee. Senator Burns was the one who introduced the stealth amendment in 2004 allowing the unprecedented change in the 1971 Wild Horses and Burros Act granting BLM "sale authority" of animals over the age of ten and those horses who fail three adoptions. This amendment was in direct opposition to the intent of the 1971 law - that no wild horse or burro should ever again be slaughtered.

WHAT YOU CAN DO:
Please call your Representative immediately - CAPITOL HILL OPERATOR - (202) 224-3121 (To find your Rep - www.congress.org )
Ask your Representative to vote for the Rahall Interior Appropriations Amendment that will stop your tax dollars from funding wild horse slaughter
Please send this to as many people on your E-mail list as possible
To find out how your Representative voted LAST YEAR (listed below and follow directions)
Please let us know if you have made the call - ispmb@lakotanetwork.com
It is critically important that you take the time to call and help us end wild horse slaughter. We thank you so very much for your efforts.

Visit www.horsetoys.com to buy the No More Night Mares book and plush light up horses and learn about saving wild horses

We Have Created a Place for People Who Love Horses and Wild Animals . Our Kids Club Empowers and Educates You About Endangered Animals and the Environment. We are teaching the next generation to not only think green- but act on it!

Wild Heart Ranch -Wild Horse News
Founders of Wild Heart Ranch-Mother and daughter Dawn and Cali Van Zant both share a love of horses and wild animals. Dawn is the Author of books: "No More Night Mares, A Dream of Freedom” honoring wild horses in a tale of myth and magic. I hope to help build further awareness for the plight of wild horses through the "No More Night Mares" line of plush toys and books, as well as through the the endangered animal news section of the site. Also author of "I Sea Horses" and "Bradford and the Journey to the Desert of Lop", books to educate and empower children about what they can do to save endangered species. Cali is the illustrator for the I Sea Horses book and runs the sales and marketing department. She has been a horse owner since she was 7 years old .

Wild Heart Ranch Product Showcase- See all the products like you would in a store- the next best thing -
http://www.wildheartranch.com/toysBooks/tb_home.htm 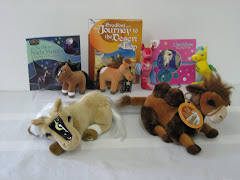 Embracing the wild hearts of children